Are you ready for 8K displays?

Are you ready for 8K displays?

Mechdyne has 8K solutions for you.

One constant in the AV Industry is change, especially regarding display resolution and related technology. Over the past 20+years, we have seen an ever-increasing demand for displays with higher and higher pixel count. This increasing resolution trend parallels home televisions where we have all seen a fairly rapid progression from standard video with approximately 307,200 pixels of resolution in the early 2000s to recent 4K TVs with 8,294,400 pixels. This is a 27 fold resolution increase in an approximately ten-year time frame. Just as 4K has become a commonplace term, we are now seeing the introduction of 8K displays for home and professional use.

An 8K experience is big, bold, and detailed: 8K (sometimes called Ultra HD 8K) is the next step forward from 4K. This takes us way beyond full HD, which is still in widespread use. In general, 8K is more: more pixels, more details, brighter color, and a wider range of brightness (and dark) levels. In-home and businesses, there is a clear trend toward bigger and bigger displays. The increase in size plays well to 8K and its increased visual immersion. It’s in these larger display sizes where the shortcomings of 4K TVs can become evident. As the screen gets bigger – and you stay in the same place to view images – you need more pixels to enable crisp and sharp images. While 4K is 3,840×2,160 pixels, 8K moves up to 7,680×4,320 pixels. So 8K is about the number of pixels displayed; four times as many as 4K UHD and 16 times the resolution of full 1920×1080 HD). Paired with features like enhanced color depth and High Dynamic Range (HDR), 8K provides a truly stunning viewing experience.

It’s important to consider that 8K and higher resolution displays have been installed in commercial and research applications for decades. However, these displays and necessary video products were done by building up a solution using an array of smaller resolution displays (like using multiple projectors, or LCD panels, or direct view LED sub-panels). The world’s first true 8K DLP projector was invented as recently as 2018. This single device projector not only saves on cost, but also on space, power, and logistic challenges as compared to ‘assembling’ multiple elements to make 8K. The first 8K panel displays, a television, was unveiled in 2012 and became commercially available in 2018. 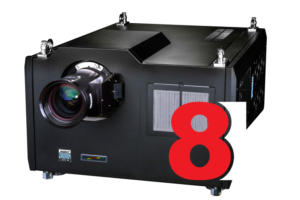 8K resolution from a single projector is now available. Select projectors will also display 3D imagery at reduced resolution. Four 4K UHD projectors could be stacked and blended but blending projectors requires overlapping images so 8K is not really achieved unless even more projectors are added to make up for losses during blending. Projection allows for scalable screen size, not fixed sizes resulting from tiling LCD and LED panel elements.

Common panel resolutions today are HD and 4K UHD. As mentioned above, it will take 16 HD panels or four 4K panels to display 8K resolution. When panels are tiled, the panel borders create visible seams which may or may not suit the content to be displayed. Also, color matching the multiple panels requires maintenance. The final, total screen size depends on the panel size used.

The business case for physically large and high-resolution screens is building as source images are increasing in resolution and complexity. 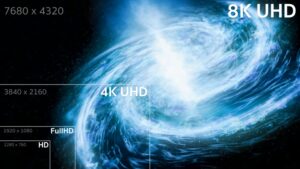 The image above shows a comparison of resolutions. The image width and height increase by double or more with each resolution improvement to maintain a constant pixel density. SD resolution at 640×480 was considered a Standard Display with a 4:3 aspect ratio for many years. The jump to full HD (1920×1080) was a big improvement in terms of the wider 16:9 aspect ratio, but also a much higher resolution. 4K is double the horizontal and vertical resolution of full HD and 8K is another doubling of 4K.

Rather than simply doubling image size with each evolution. Display makers often kept to the same large screen sizes. This increased the pixel density (number of pixels in the same space) for stunningly more detailed images with 4K and now 8K displays.

Can we see the difference between 4K and 8K? This is the most commonly asked question about the reason and need for an 8K display. The answer is: It depends on three things:

The first two are elements of Human Visual Acuity

The human visual system is remarkable, but it has its limits. In particular, we can perceive only a certain amount of detail. So, how much detail can a person with normal (20/20) vision perceive? A comprehensive answer is complicated; it depends on which part of the visual field the image is in, the amount of contrast in the image, the amount of ambient illumination, and other factors.
As a basic guide, imagine a series of alternating black and white vertical lines on a bright display and each line is one pixel wide. A person with 20/20 vision in a well-lit environment (conference room), centered on the screen and looking straight at it, should be able to distinguish at least 30 black-white line pairs within an angle of one degree in their field of vision. Technically, this is called 30 cycles/degree. You can also think of it as 60 pixels/degree since each black-white line pair is two pixels wide.

This is why Screen Size, Pixel Size, and Viewing Distance all work together if you want a display that makes effective use of your visual acuity.

The maximum seating distance at which you can see 30 black-white line pairs in one degree depends on the size of the pixels, which in turn depends on the resolution and screen size. For example, on a 100″ diagonal screen:

We could look at this the traditional way. At a given resolution, as the screen size increases, so does the pixel size. So, to have 60 pixels/degree in your field of vision, you need to be closer to a 65″ 4K screen than you need to be from a 100″4K screen. Exactly how close or far you need to be from the screen can be roughly calculated if using a set screen size (eg. 100”) as a comparative. But this does not take into account variables in the way the brain perceives more realistic imagery. A pre-measured configuration may not be the most appropriate. Depending upon the application, some ‘eyes-on’ testing may be necessary to determine the optimal 8K setup.

At this point, the need for 8K depends on how you will view detailed imagery on your screen.

We can see for this 100” screen example that if you remain seated 6.5’ or further from the screen, 4K resolution would be adequate, although if viewers move around and wish to approach the screen for a closer view of parts of the image(say for critical detail or touch interaction), then an 8K display would be the better choice. If 4K is adequate for your usage, but you would like a larger screen size, then an 8K display would allow you to use a much larger screen size and enjoy the same or an even higher pixel density.

8K is a good choice when a user/viewer has to get close to the screen to examine the data. 8K projection on a 100” (2.54m) screen will allow the viewer to get within 3 feet (1m) of the screen and still not see individual pixels.

Even for multiple viewers, utilizing one continuous image in full 8K resolution offers those viewers an amazing viewing experience that is ever closer to real-time human sight. Such applications range from planetariums, to theatrical and performing arts centers, to visitor attractions. These displays generate image qualities that few have ever experienced before and are certain to leave a lasting impression.

As happened with the introduction of 4K displays, lower video resolutions could be automatically scaled to the higher resolution. This can occur with 8K displays as well but certainly does not take advantage of this incredible visual opportunity. Content not only needs to be captured at 8K or higher resolution, but the lens must be able to support this resolution too. This resolution needs to be well preserved throughout the production and distribution pipeline, including compression and bandwidth if streamed. In addition, perceiving the difference between a 4K and 8K image is also content dependent – that is, scenes with low texture may not appear any crisper or more real in 8K, but scenes with high texture and detail should.

Concerning computer generated graphics, current graphics cards can render to 8K resolution without problem. But just because it’s possible doesn’t mean it is necessary for all applications. Computer generated visual effects rendered for inclusion in 8K video productions make sense to be produced in an 8K ecosystem. Automotive designers concerned with curvatures, reflections, and fine detail should welcome this level of reality. Astronomers may realize new insights if they viewed the new, high resolution map of the galaxy in 8K or an environment created with multiple, tiled 8K displays. While it may seem obvious that corporate powerpoint and standard video conferencing will not benefit from 8K, it’s possible that multiple content streams combined into one 8K display could make sense.

One big advantage to owning an 8K display is that while it certainly is four times the amount of pixel than that of 4K resolution, that means you can display four 4K content sources at the same time without any loss of visual acuity or limitations on the image. Further, you could also display sixteen sources in full HD at the time. This would be an enormous advantage in certain locations such as a sports bar/restaurant or command & control centers in which multiple content feeds would need to be displayed simultaneously (think March madness!).

8K is another step in the natural evolution toward higher fidelity displays. There are always early adopters of new technology but successful implementation of 8K systems requires examination of all elements of production, integration, and end-use. There are also multiple ways to achieve 8K resolution and even go beyond 8K resolution. The best starting point in any selection process is at the end; how will the display be used and what are those end-user’s content and display goals. As the title says, today’s user might or might not be ready for 8K. Only after knowing what the display goals and success look like can the right choices be made.