The “workspace of the future,” Carnegie’s VizLab will unlock the secrets of the universe

Home > News > Augmented & Virtual Reality > The Workspace of the Future

The “Workspace of the Future,” Carnegie’s VizLab Will Unlock the Secrets of the Universe

Pasadena, CA. — In a refurbished Southern California garage, Carnegie astrophysicists are creating the scientific, virtual reality-enabled workspace of the future. In it, they will unlock the mysteries of the cosmos.

Imagine standing in front of a wave of data and probing the mysteries of the universe’s most-ancient galaxies. Meanwhile, you’re side-by-side swirling, colorful simulations of galaxy formation—seeing what aligns with expectations and what needs further interrogation.  A portal to fake universes may sound like science fiction, but it is now a reality at the Carnegie Observatories.

The campus recently began its new experiential installation for visualizing data, a “VizLab”

It will enable bleeding-edge discoveries that reveal how our universe works. 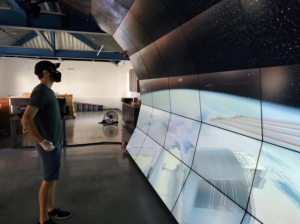 “Science is collaborative and multi-disciplinary,” said Juna Kollmeier, Director of the Carnegie Theoretical Astrophysics Center. “But our workspaces are often solitary and siloed.  I envisioned a space where teams could work together as they synthesize an unprecedented amount of data.  21st-century data require 21st-century laboratories.”

The lab includes an immersive visualization display system with 35 2D- and 3D-capable flat panels in the shape of a cresting wave. It’s a useful configuration and an artful representation of the tsunami of data rushing into the astronomical field.

“This new ultra-high-resolution virtual reality lab will give Juna and her team an advantage in harnessing massive amounts of both simulated and observed data,” said Carnegie President Eric D. Isaacs. “The VizLab will be an extraordinary facility that will enable them to lead the next great leap forward in astronomy.”

Added Kollmeier: “I wanted to capture the collaborating that is often done together in front of blackboards, but with the capability of interrogating huge simulations and datasets like a Holodeck on Star Trek. Maybe, we’ll also fight the Borg. There are lots of possibilities.”

“…to work with Dr. Kollmeier and the brilliant team at the Carnegie Observatories,” said Chad Kickbush, General Manager of Mechdyne’s AV and Virtual Reality Business Unit. “We knew that we could deliver the pixel density needed for these detailed datasets to be explored, but it was only through a very collaborative process that we designed this unique configuration that allows the user to look up into the immensity of the universe. That is our goal at Mechdyne, to enable discovery by removing obstacles to insight and understanding.”

“Mechdyne has been an incredible partner to Juna and her team from this project’s conception,” said Observatories Director John Mulchaey. “Their collaborative approach at every level enabled Carnegie to make our vision for this groundbreaking apparatus a reality.” 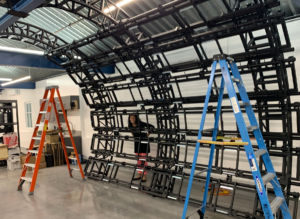 More data is available now than any time in history, thanks to advances in instrumentation. Additionally, to the next generation of astronomical surveys. This includes the Sloan Digital Sky Survey’s fifth generation, of which Kollmeier is the director. But astronomy is more than just cataloging of celestial objects and events. Documentation must be interrogated and interpreted in order to build a new understanding of the clockwork governing our universe.

“As the field advances, our VizLab will also provide an excellent training ground for our postdocs and graduate students, who will go on to join a network of Carnegie alumni driving discoveries at institutions around the world,” said Anthony Piro, a senior member of CTAC.

The VizLab grows directly from the computational infrastructure that Carnegie theorists have been building over the past decade at the Observatories, thanks to the generous support of NASA and The Ahmanson Foundation, the latter of which was also a major funder of the Viz Lab. 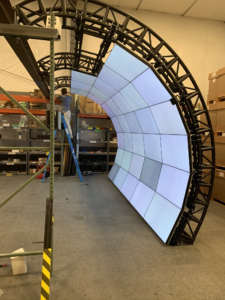 Available to the public soon!

The VizLab’s potential is so exciting that it would be a wasted opportunity not to let the public get a peek at its wonders, too. Early next year, the theory group will throw a virtual launch party to introduce Carnegie fans and friends to their breakthrough machine.

“The VizLab will allow us to bring the telescopes of Carnegie’s Las Campanas Observatory to Pasadena,” concluded Andrew Benson, another CTAC senior member. “In a normal year, thousands of visitors pass through the Observatories’ halls for school visits, group tours, and our annual open house event.  Now we can bend the rules of time and space, allowing them to visit the farthest reaches of the cosmos.”