Giving a D-1 School an A-1 Sports Facility

Helping Iowa State Up Its Game

Iowa State University had grand ambitions for the new Stark Sports Performance Center (SPC). Not only would the storied Cyclones football team make its home in this $90 million expansion of the Bergstrom Football Complex, “The facility provides holistic support for every aspect of the student-athlete experience,” says ISU President Dr. Wendy Wintersteen.

Though unprecedented in size and scale, the Sports Performance Center is more than a physical asset. For this Big 12 school, it’s a strategic one – central to athlete recruitment and retention, and foundational to superior athletic performance. ISU wanted a facility that gave student-athletes a sense of ownership and pride, while serving as a powerful draw for prospective student-athletes. Accomplishing those objectives required champion-caliber creativity, ingenuity and project management capabilities. And for that, ISU turned to Mechdyne.

Mechdyne understood the unique nature of this project, given our familiarity with complex integrations and our history with ISU. For the Sports Performance Center to have the desired impact and utility, it had to be user-friendly, for everyone. Which meant the technology not only had to inform, engage and impress a diverse array of digitally savvy users. Many of its features – from streaming media to presentation systems – had to be easily operable by them. And while providing that degree of user access, the design also had to allow for easy management and control by building managers and the tech team. Accomplishing all this would require seamlessly integrated technology with simple, ubiquitous interfaces that belied the underlying complexity of the system. 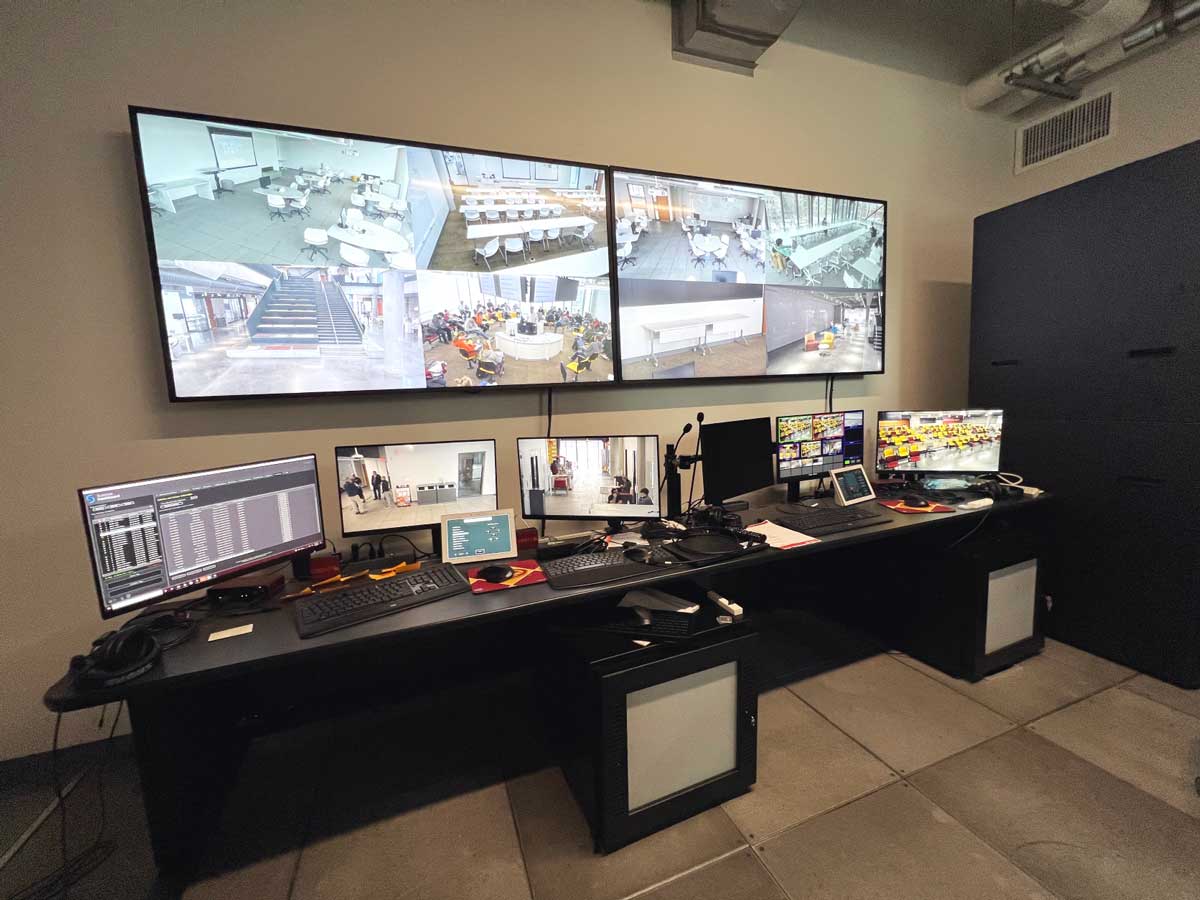 One other wrinkle: To optimize service and support resources, ISU wanted the entire facility to be controllable remotely from its tech facility elsewhere on campus.

Says Austin Minnihan, associate director of network production and engineering for Iowa State University Athletics, “For student–athletes I wanted interfaces that they could simply look at and understand. At the same time, it was important to give coaches total control over all the functions they needed.” That meant providing different degrees of access, but uniformly easy operability. Tasked with overseeing multiple facilities, Minnihan wanted an integration so intuitive in design that most users wouldn’t need him to walk them through basic functions or fix unintentional mistakes. And when his skills were required, he wanted a system that he could access across the network instead of needing to troubleshoot on-site.

From remote access to user-friendly operation, ISU’s requirements were clear – but the way forward was hardly simple.

As the university’s technology integration partner, Mechdyne collaborated with the ISU tech team from the very beginning. Our in-depth discovery process includes a thorough use case review, enabling Mechdyne to create a final design and program user interfaces to suit all scenarios. The process resulted in few alterations to the plan and no change orders – an outcome that’s all the more notable given the wide scope of this project. 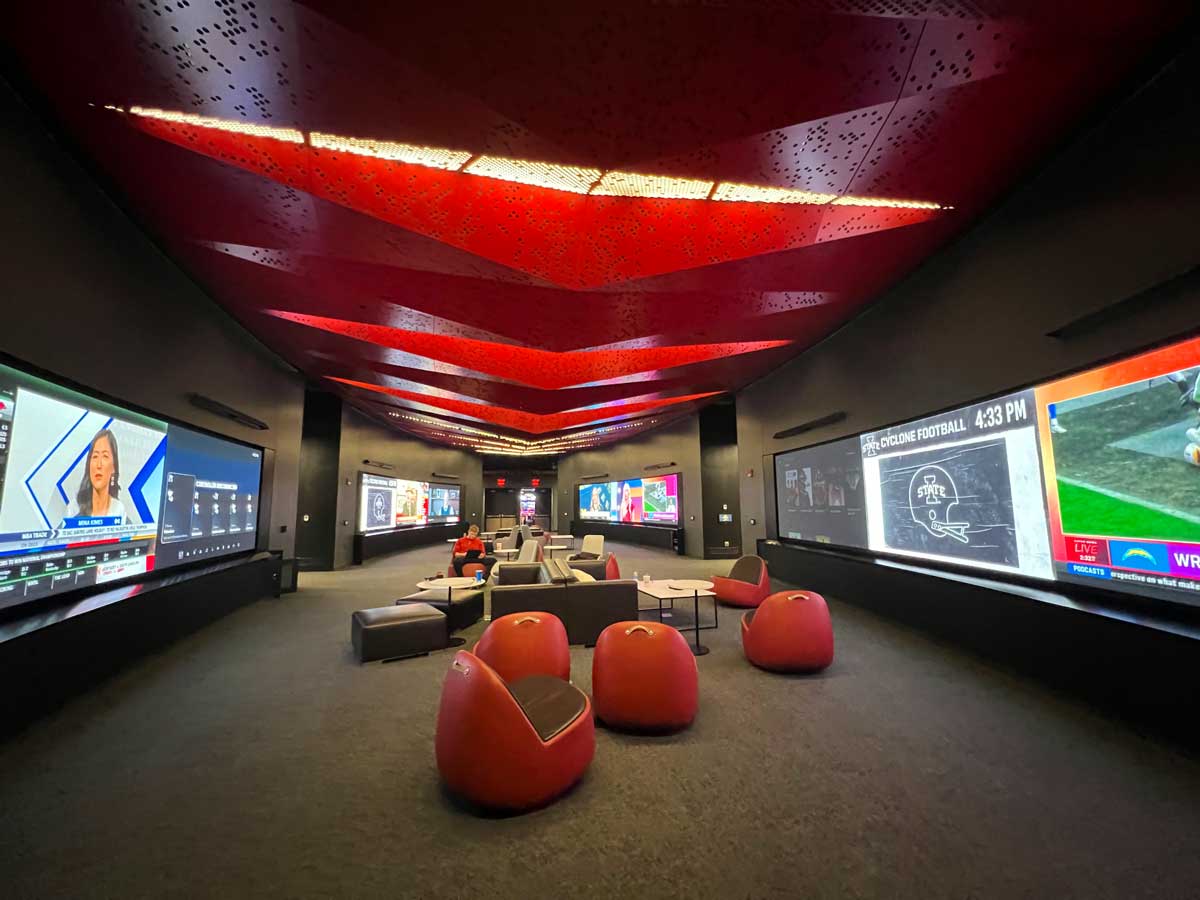 Mechdyne impacted every aspect of the user experience, facility wide. Large LED displays dominated in the atrium lobby, football entry hall, the media/press conference room, and locker room. Smaller displays were installed in offices, the dining hall, student engagement offices and lounges. And all of them are AV-over-IP integrated for ease of operation, service and support.

The center of the student-athlete experience is the Sports Performance Center’s 8,000 sq. ft. locker room. And here Mechdyne and Minnihan worked closely to create a one-of-a-kind environment.

Accommodating about 130 student-athletes, the locker room is dominated by a large central gathering place – an oval, football-shaped room within a room. Here athletes can meet before and during the game, relax afterwards, and simply congregate on a day-to-day basis. Built-in LED wall displays conform to the shape of the room and are complemented by additional screens – totaling nearly 700 square feet of displays. The four largest screens can each be divided into three sub screens, enabling 12 sources to run simultaneously. Each can be controlled individually so that some athletes can watch television while others play video games or review game footage. They can also show one large image, providing a big-screen experience. 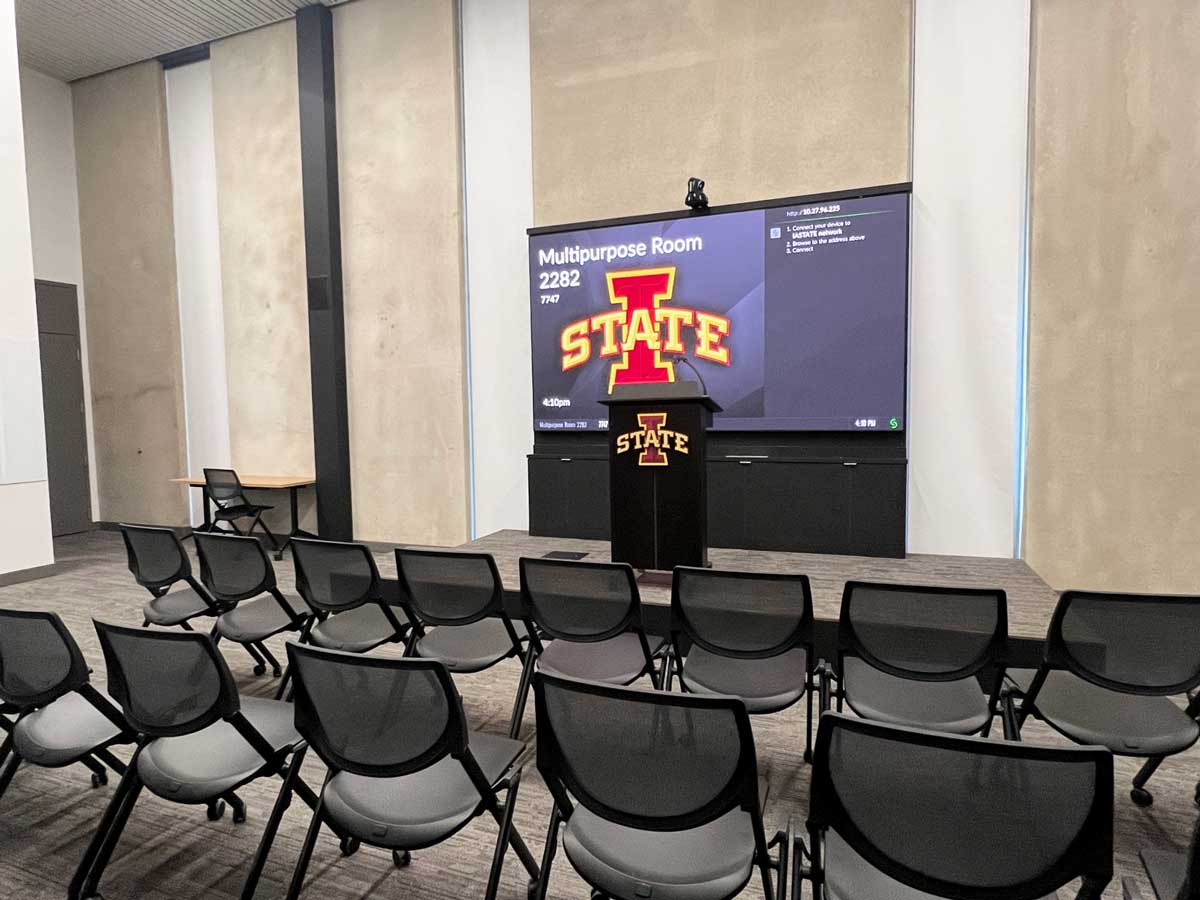 Working closely with Minnihan, Mechdyne programmed custom interfaces that gave athletes a high degree of access to content while simultaneously granting staff a deeper level of control. Says Austin Minnihan, “We have various modes for an array of purposes. One mode opens up touch panels that the players can use to do whatever they like. Another panel gives coaches control over every input and output. They can route whatever content they want, wherever they want it. An additional mode offers the option to play videos. And because this is a 360° room, you can create a truly immersive experience.” When the room isn’t being used, Logo Mode displays the Cyclones logo, creating a truly branded environment. There’s also a Mute Mode that enables the coaches to command everyone’s attention, wherever they are in the room. Mechdyne programmed the entire user control system based on use case discussions held at the start of the project.

The media room LED display was also designed for multi-purpose use. On a day-to-day basis, it provides an ideal environment for staff to hold meetings and conferences, and on game day the displays provide a vivid virtual production backdrop for interviews, showing both ISU and sponsor branding.

From the largest to smallest display, every screen across the facility is connected to the network. “We’ve created a number of programming channels – from a Cyclone information center channel to a sports medicine channel, a football channel and many others,” says Minnihan. Whatever messaging ISU wants to communicate at the moment, the entire system accommodates with a simple click.

Yet flexibility and wide operability do not come at the expense of centralized control. The 100% AV-over-IP design enables Minnihan and his fellow tech administrators to operate every aspect of the technology integrated into the building – every display, every mode, everywhere – from their offices elsewhere on campus. Completing the remote-access design, Mechdyne installed touch panels with ethernet ports throughout the facility, conferring an even greater degree of versatility and control. 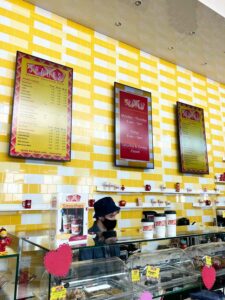 User-friendly, intuitive operation combined with centralized remote control has had a liberating effect on Minnihan and his tech team. “My number one goal when working with student-athletes was to enable them to look at an information access panel and understand it. I wanted the interface to be so intuitive that they could just walk up to it and operate it.” The integration has been so successful in this regard, says Minnihan, that “I’ve gotten very few questions about how to work the tech because users just figure it out on their own. The panel displays provide my contact information in case a user needs assistance, but they just don’t need to use it.”

Moreover, when service, support, and updates are required, the tech support team can troubleshoot and remediate issues remotely thanks to the AV-over-IP system design.

ISU views Mechdyne as a critical partner in realizing its vision for the Sports Performance Center. “Anyone can hang stuff on a wall, but making it user friendly when it’s all said and done is where the magic happens,” says senior associate athletic director Chris Jorgensen. At the planning stage of the project, he considered all that could go wrong. “You have all the hardware in place, but a coach can’t run it. Or something goes wrong, and they can’t troubleshoot it because the interface is too complicated. Well, we’ve been in the building for nearly a year, and that just hasn’t happened.”

Minnihan echoes his colleague’s verdict on the integration. “It’s definitely the best working system in any of our facilities – and that’s in large part because of Mechdyne.”