Mechdyne’s technology is featured on the cover of InnovationIOWA Magazine

Working with a nationally renowned research facility five years ago, Mechdyne created a state-of-the-art virtual reality training and testing environment to understand how soldiers perceive and respond to events in theater. In 2021, we were asked to reimagine and improve that solution. The technology is new, but the mission remained the same: to help our service members perform effectively – and return safely. 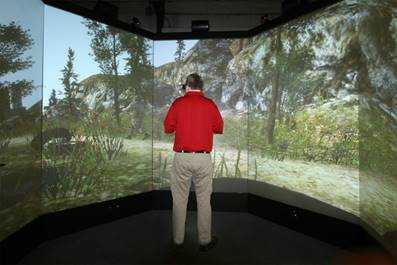 As a specialist in complex audio visual integrations, Mechdyne was a natural choice to develop an advanced virtual reality (VR) training simulator and testing environment for the U.S. military. And in 2017 we partnered with a highly esteemed academic research institution to do just that.

The original installation involved several immersive environments developed as rear projection screens, arrayed in a semi-circle and augmented by motion-tracking cameras, audio, and diagnostic gear. It yielded an abundance of high-quality data, and the more researchers learned, the more avenues for exploration they envisioned.

The researchers needed a partner who not only understood what they wanted to achieve in a next-generation installation, but had the expertise and ingenuity to realize their next-level vision. Improvements in the system would enhance research findings. Again, they turned to Mechdyne, leveraging both our history with the facility and our pioneering expertise in immersive virtual reality solutions. The lab wanted to improve its work, and we were eager to help.

Giving Our Soldiers the Edge They Need 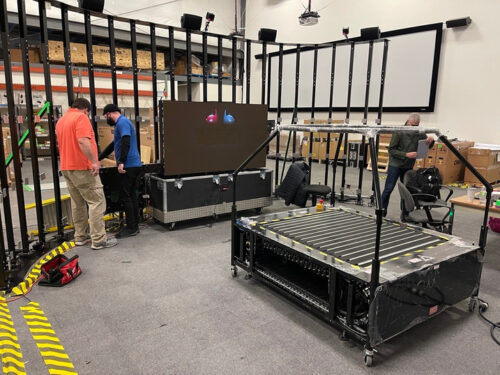 The military had several requirements for the new system, each mission critical. The first was enhanced visual fidelity. For example, soldiers are often called upon to identify distant people and objects, as well as camouflaged ones. The original system’s projected images couldn’t reliably provide the visual clues necessary for identification. Complementing the improved visuals, a new generation of software and graphics processors would also create more realistic testing and training scenarios.

Increased user mobility also ranked high among the military’s expected deliverables. By replacing space-intensive projectors and mirrors with LEDs, the new design would enable a significantly larger testing area where soldiers could move more naturally, react to wider range of scenarios, and train alongside others.

The new installation’s smaller footprint would be a boon for the research facility as well. Located in a high-density urban setting where every square foot held the potential for monetization, the lab saw significant potential to free up space for other uses.

At the same time, a new virtual reality room design offered far greater durability and reliability than the legacy system. Even digital projectors lose brightness after 20,000 hours. Direct view LEDs can last up to 100,000 hours. That translates directly to lower operating costs and greater return on investment.

While some deliverables – projector lifespan, system cost, square footage – come down to numbers, others are less tangible. The military wanted effective future soldier training and high-quality, actionable data. The lab wanted a technology partner who wouldn’t just execute on its vision, but build on it. The researchers also needed a partner they could count on to be there throughout the life of the installation – an ally to optimize performance and maximize ROI. 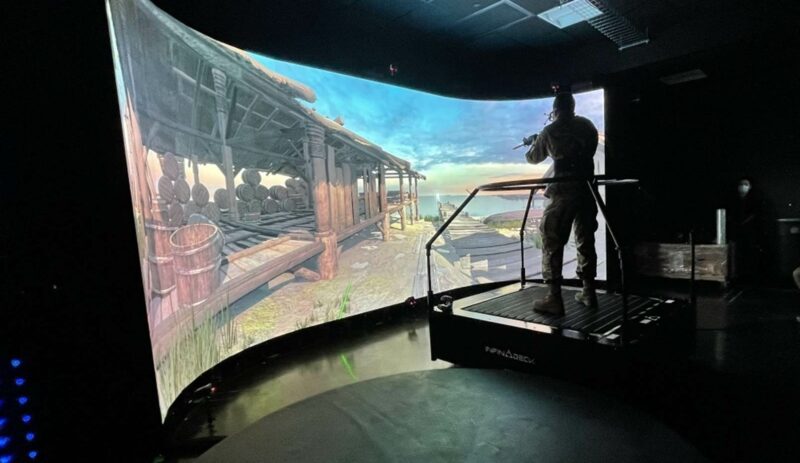 In order to provide a dramatically enhanced training and testing experience, we had a powerful tool in today’s direct view LED video wall technology. It not only provides high resolution but far superior contrast ratios – essential in an immersive environment. The display’s brightness also withstands ambient light, and it extends uniformly to the periphery of the panels. The challenge became creating an immersive visual field in a limited space where every foot matters.

Technology alone wouldn’t get this project across the finish line. Success depended just as much on human ingenuity. “Our solution consisted of 96 LED cabinets arrayed in a half moon. Convention dictates a cabinet rotation of no more than 5 degrees in order to avoid light bleed. Yet, to achieve our goals in the space provided, we needed approximately 12 degrees of rotation,” said Mechdyne solutions architect Terry Mercer. By engineering a custom solution, Mechdyne was able to deliver the visual punch of a 25-foot-wide screen with a 16 x 10 aspect ratio in an installation that was just 18 feet across and about 6 feet deep.

To ensure the solution worked as intended, Mechdyne conducted extensive pre-installation testing at its Marshalltown, Iowa facility, followed by on-site integration performed entirely by Mechdyne personnel with the assistance of a team from its manufacturer partner, SiliconCore.

“This is the kind of integration where Mechdyne really excels,” says Mercer. “Along with the requisite technical and engineering expertise, we have culture of listening and a mindset of possibility that enables us to translate a client’s objectives into a working reality.”

Both the research lab and the military register ongoing satisfaction with the training system performance. The integration operates reliably under heavy use; data integrity is high; and soldiers who have trained in the lab offer consistent praise for the realism of experience. All are in agreement that the use of VR for military training is extremely beneficial.

Adherence to budget and schedule are also important measures of success, and Mechdyne hit the mark on both. “On the one hand, this is par for the course for our company,” comments Mercer, “but in this case we’re especially pleased with project management because the integration took place while the lab was undergoing major reconstruction. Moreover, we not only built the new installation, we decommissioned, packed up, inventoried, retested and reassembled the old one in new location.”

Perhaps the strongest measure of success is the enduring strength of Mechdyne’s relationship with the client. “They know we’ll be there to keep the integration performing at peak capacity, and to provide them with the next generation of AV solutions.”

Added History: Mechdyne integrated a system similar to this back in the year 2000. It, too, was for army personnel readiness training but the technology was not as evolved as todays. The screens used CRT-based projectors, the treadmill was more than double the size, all technology was wired, and the software was not developed enough to allow connection of collaborative head mounted displays.

This is one example of Mechdyne’s ability to create customized and highly versatile virtual reality simulation training systems that will meet your exact specifications. Whether it be a military-oriented training or task training of any kind, Mechdyne has the experience to deliver the highest-quality solution.