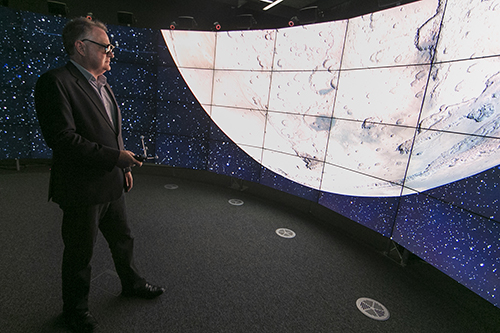 Monash University is the largest research intensive university in Australia. Their restless ambition has shown success throughout their massive research portfolio in engineering, medicine, science, life sciences, history, and archeology. Monash’s motto, Ancora Imparo (“I am still learning”) keeps them focused on breaking new ground and setting benchmarks from all disciplines. In their never-ending quest for knowledge, Monash jumped into the Big Data era with both feet, and began searching for a way to support and accelerate collaborative, visualization-led discovery. But like their research accomplishments, Monash wanted their visualization technology to be extraordinary.

Monash partnered with Mechdyne to deploy a virtual reality environment that would showcase their leadership in the data visualization domain. Recognizing the importance of a hybrid visualization environment with approaching 100 million pixels, Mechdyne and Monash designed a CAVE2. Monash puts their students and researchers in the middle of a data and geometry experience. The CAVE2 supports knowledge discovery by acting as the viewfinder for the 21st century microscope; the display resolution, contrast, and clarity make the leap into the Big Data era using modern, terascale datasets.

As researchers are dropped into data sets, they are able to rely on their intuition and scientific background to make new discoveries in the nearly total wraparound environment with the highest resolution. By visualizing, manipulating, and comprehending complex data-such as engineering models, multi-dimensional images, and scientific and computational outputs-students and scientists have success in research that couldn’t otherwise be done.